A graphical depiction of the developed image’s light levels. 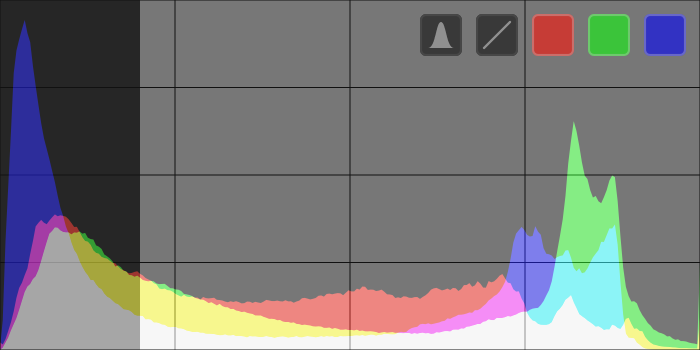 Move the mouse over the panel to show buttons that allow you to adjust the display. The leftmost button cycles the mode between a “regular” histogram, a waveform-style histogram, and a vectorscope. The next button controls how the data for the current mode is displayed. In the case of regular and waveform histograms, the three rightmost colored squares are toggles that enable or disable the display of the red, green and blue color channels.

When the mouse is over the histogram panel, scroll with the mouse while holding down the Ctrl key to change the height of the panel. You can show/hide the histogram entirely with a keyboard shortcut (default Ctrl+Shift+H).

For performance reasons, the histogram display is calculated from the image preview (the image displayed in the navigation module) rather than the higher quality image displayed in the center view. The preview is calculated at a lower resolution and may use shortcuts to bypass more time-consuming image processing steps. Hence the display may not accurately represent fine detail in the image, and may deviate in other ways from the final developed image. 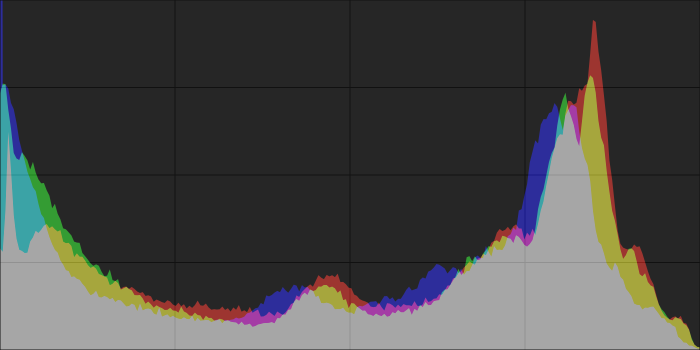 The regular histogram shows the distribution of pixels by lightness for each color channel.

In its default state, data for all three RGB color channels is displayed. The x-axis runs from 0% to 100% lightness for each channel. The y-axis gives the count of pixels with the given lightness.

Click the second-to-leftmost button on the panel to toggle between a logarithmic and a linear rendering of the y-axis data. 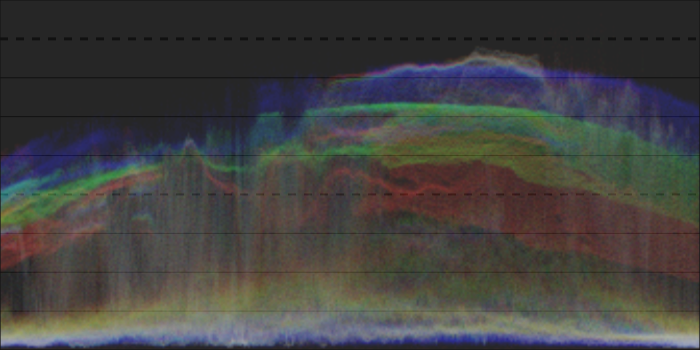 The waveform scope also includes spatial data about the image.

The brightness of each point on the waveform represents the number of pixels at the given position (the x-axis) having the given lightness (the y-axis).

As with the “regular” histogram, you can selectively display each of the red, green, and blue channels, by clicking on the appropriate buttons.

See Of Histograms and Waveforms for more on darktable’s waveform scope. 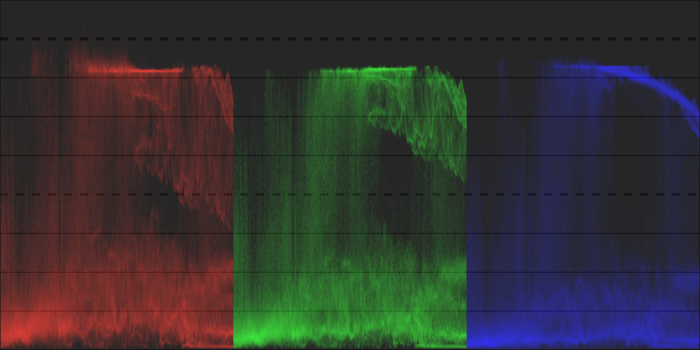 The rgb parade scope shows the same data as the waveform, but with the red, green, and blue channels presented side-by-side.

When in waveform mode, clicking the second-to-leftmost button on the panel toggles between waveform (overlaid) and RGB parade rendering of the data.

The RGB parade can be useful for matching the intensities of the red, green, and blue channels. It can also help with understanding the differences between and individual qualities of each channel. 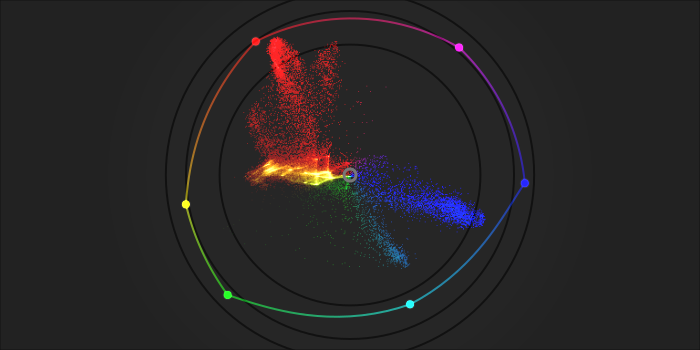 The vectorscope shows chromaticity without regard to either lightness or spatial data.

The vectorscope chroma scale can either be linear or logarithmic. Click the second-to-leftmost button on the panel to toggle this.

The vectorscope can describe the image in either the CIELUV or JzAzBz colorspace. Clicking the third-to-leftmost button on the panel cycles between u*v* and AzBz. The CIELUV graph will be faster to calculate, and is a well-known standard. JzAzBz may be more perceptually accurate.

The graph includes a “hue ring” representing the maximum chroma of each hue (in bounded RGB) of the current histogram profile. The RGB primaries/secondaries are marked by circles.

The “regular” and waveform-style histograms can be used to directly alter the exposure and black level of the exposure module.

For the regular histogram, click towards the right-hand side of the histogram and then drag right to increase or drag left to decrease the exposure. In a similar manner you can control the black level by clicking and dragging in the left-hand side.

You can also scroll in the appropriate area – rather than dragging – to adjust exposure and black point. Double-click in the histogram to reset the exposure module’s parameters to their defaults.

As the histogram runs at the end of the preview pixelpipe, it receives data in display color space. If you are using a display color space that is not “well behaved” (this is common for a device profile), then colors that are outside of the gamut of the display profile may be clipped or distorted.